Is Rahul Gandhi ready to be de jure Congress Prez or will he continue as its de facto chief? 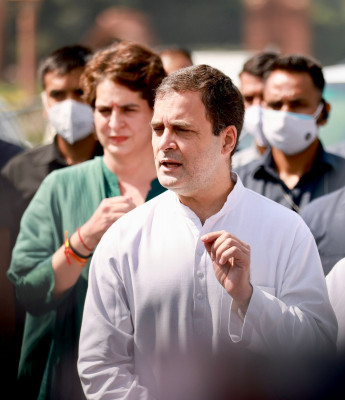 The Congress Working Committee (CWC), the grand old party's so-called highest decision-making body, will meet on October 16 to elect/select its full-time President given that the incumbent, Sonia Gandhi, does not want to hold on to the post any longer.

She had given up the post in December 2017 after remaining at the helm for over 19 years, and passed on the baton to her son Rahul Gandhi who after years of reluctance and dilly dallying decided to bite the bullet and accept the responsibility.

But he brought an abrupt end to his tenure by resigning from the post after the party's humiliating defeat in the 2019 Lok Sabha elections.

After he refused to take back his resignation, the CWC persuaded Sonia Gandhi to once again take over the reins of the organisation as it's interim chief.

She agreed but with a condition that the new president will be elected within one year. While Rahul Gandhi resigned on May 25, 2019, Sonia Gandhi took over on August 10, 2019.

So, it has been over two years now that Sonia Gandhi is functioning as the interim Congress President.

In between, the Congress has witnessed much turbulence with a group of 23 dissident leaders, also known as G-23, raising a banner of revolt and writing a letter to Sonia Gandhi, demanding a full-time President, visible leadership and organisational elections from top to bottom.

It is also a fact that Sonia Gandhi is the party chief only on paper and all the decisions related to the Congress are taken by Rahul Gandhi.

In some cases such as the appointment of Navjot Singh Sidhu as the Punjab Congress President, the writ of Priyanka Gandhi Vadra seemed to have prevailed.

Recently, the G-23 once again demanded convening of the CWC to end the uncertainty at the top in the party.

The announcement of the meeting has once again resulted in the growing clamour for Rahul Gandhi to return as the Congress President.

So, it remains to be seen if he will shun his reluctance and finally take the bull by its horns, and from being a de facto Congress President to its de jure chief.