Is Brazil more dangerous without Neymar? 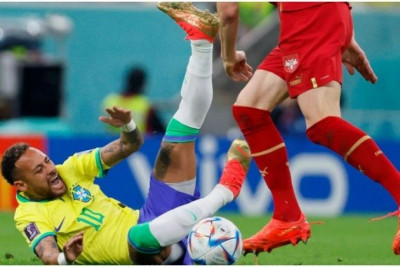 Brazil, the most successful team in the football world cup,started with a 2-0 win over Serbia in Group G. As they are preparing to face Switzerland today, it is confirmed that Neymar will be missing the match due to an ankle injury. But, is that a concern for Brazil? Well, stats and their game after Neymar substitution says no.

After the second goal, commentary was like this "Neymar was not involved in both the goals. He has been pretty average by his standards. But, it's good that they(Brazil) are not relying him much to score".

Neymar came off at 80th minute.

After that, 10+7 added minutes were played.

In the 80th minute, Brazil reached the box with 10 passes.

80' another passing sequence at the end of which Casemiro hit the post.

83' Shot from Fred, great stretching save by Savic. Corner for Brazil.

85' Jesus cross, which was dangerous from right side. Cleared.

86' Rodrigo shot, just over the crossbar.

87' Martinelli cross, after a flying run through the left wing, headed away for safety by Serbia.

After 10 minutes, Serbia got the ball and made 2 crosses. Juventus star Vlahovic barely got any touch on the ball.

Kaka's comments after the match sums it up:" I hope he can recover for the next game and be ready. This tournament is the one that gives him a platform to shine - and against Serbia he certainly didn't shine before he was injured.

The one positive is that when he went off the pitch, Brazil played a very good game".

With the win over Serbia, Brazil completed 16 unbeaten wins in group stages of the world cup. They were group leaders since 1982. They were never out of a world cup after group stages since 1966. They finished this match, with 8 matches win, with a goal tally of 28 to 2 conceded. What a team !! What a legacy!!