International football is improving but at a crippling cost 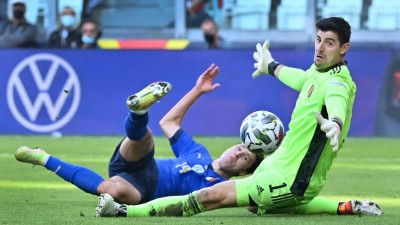 The two UEFA Nations League games last night were engaging and were played at breakneck speed. Despite the games prior to them having been played just days before, there was something enthralling about those two games that seemed so different from the international games that were played three years ago.


Regardless of the entertainment we get though, it comes at a cost. Belgium goalkeeper Thibaut Courtois talked about after Italy’s win on Sunday, criticising the football authorities for essentially overworking footballers and showing little regard.


Perhaps, this was coming for some time. The old saying of ‘content is king’ has begun to be applicable for football now more than ever. More the number of games played, higher the revenue for authorities. At a time when the pandemic has hurt the finances of not just clubs but authorities as well, the footballing administrators would well and truly want the game to be on as much as possible.


They would want more supposedly ‘elite’ teams to play, as those elite teams generate more global revenue than the lesser ones. The recent decision of eliminating the away goals rule in European competition hinted at that and so did the European Super League.


FIFA lost over $600 million because of the pandemic and hence the idea of a World Cup every two years took shape. Because of how much national authorities and UEFA lost during the pandemic is why the Euros took place across Europe. With the gruelling club schedule already in place and the World Cup to be played in the simmering temperatures of Qatar next year, it says a lot about how much the authorities care about players.


The recovery periods for players will reduce. There will be more travelling involved, if you consider how the Premier League is considering international matches and how Italy and Saudi Arabia are planning a joint World Cup bid. The burden on players will go beyond what sports science can manage.


This expansion and maximisation of the game may entertain us and fill up the coffers of the owners and administrators, but it will turn players into the jokers of a local circus.