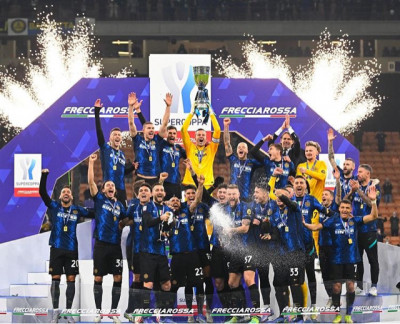 Inter beat Juventus with a scoreline of 2-1 after playing for 120 minutes. It was a great match to watch as the game was neck to neck until the last kick of the game. Alexis Sanchez was the player of the game which led inter to win the Supercoppa after 15 years.


Inter played the game with the formation of 3-5-2. Martinez, Dzeko, Perisic and Skrinkar were in the starting 11. Juventus went with a formation of 4-4-1-1. Morata, Mckennie, Rabiot, and Chiellini started the game.


Inter were in control of the game. They had 63% possession in the game. Inter had almost three times the shots as compared to Juventus. Inter had 23 shots whereas Juventus just had 8 shots in the whole game.


Weston Mckennie gave Juventus the lead in 25 minutes. Martinez equalizes 10 minutes later. The game was 1-1 at the end of 90 minutes. Alexis Sanchez was substituted for Martinez in the 75th minute.


The game went on till the 120th minute with no clear winner. Inter were continuously putting pressure on the Juventus defence. At the last minute of the extra time in the second half of extra time, Alexis Sanchez was in the attacking position. At the last kick of the game, he scored the winner for Inter.

The scenes were unreal and unpredicted by both teams. Inter was crowned the Supercoppa winners for the first time since 2006.


Juventus are the team with the most Supercoppa titles (9). However, they were just not up to the mark to clinch the trophy for the 10th time.

The celebrations will continue at Inter for a few days until they face Atlanta over the weekend. Juventus needs to get back from the defeat and focus on their league match against Udinese on the weekend.