Indians are forced to change rituals for their dead as COVID-19 rages through cities, villages 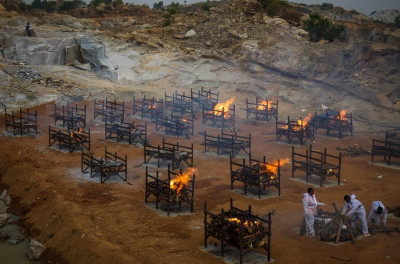 Hundreds of families want their loved ones’ bodies cared for as quickly as possible, but there is a shortage of people who can do the funerals and last rites. This has led to a situation where people are paying bribes in order to get space or a furnace for cremation. There are also reports of physical fights, and intimidation.

As a scholar interested in the ways Asian societies tell stories about the afterlife and prepare the deceased for it, I argue that the coronavirus crisis represents an unprecedented cultural cataclysm that has forced the Indian culture to challenge the way it handles its dead.

Many Americans think of cremation happening within an enclosed, mechanized structure, but most Indian crematoriums, known as “shmashana” in Hindi, are open-air spaces with dozens of brick-and-mortar platforms upon which a body can be burned on a pyre made of wood.

Hindus and Sikhs will dispose of the remaining ashes in a river. Many shmashana are therefore built near the banks of a river to allow for easy access, but many well-off families often travel to a sacred city along the banks of the river Ganges, such as Hardiwar or Benares, for the final rituals. Jains – who have traditionally given significant consideration to humanity’s impact on the environmental world – bury the ashes as a means to return the body to the Earth and ensure they do not contribute to polluting rivers.

The workers who run shmashana often belong to the Dom ethnicity and have been doing this work for generations; they are lower caste and subsequently perceived as polluted for their intimate work with dead bodies.

The act of cremation has not always been without controversy. In the 19th century, British colonial officials viewed the Indian practice of cremation as barbaric and unhygienic. But they were unable to ban it given its pervasiveness.

However, Indians living in the United Kingdom, South Africa and Trinidad often had to fight for the right to cremate the dead in accordance with religious rituals because of the mistaken and often racist belief that cremation was primitive, alien and evironmentally polluting.