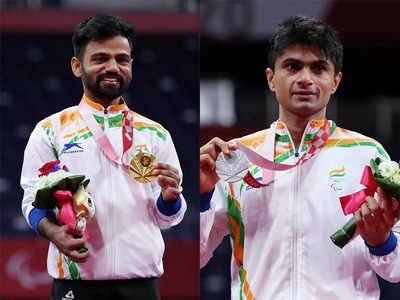 Promises made, promises kept. It's time to say sayonara. Tokyo has been richly rewarding for Indian athletes, and all good things must come to an end. Of course, there's that temptation to sign off with one final flourish. So, on an overcast, drizzly Sunday, para shuttlers
Krishna Nagar
and Noida's district magistrate
Suhas Yathiraj
did just that.
A historic gold and silver finish at the Yoyogi National Stadium capped off the country's remarkable
Paralympics
and Olympics Games show.
India concluded its campaign with an astonishing 19 medals, including five gold, to finish 24th among 162 participating nations in the overall tally on the basis of gold medal count. The country was placed 20th based on the total numbers of medals (19) won. The medal count also included eight silver and six bronze.