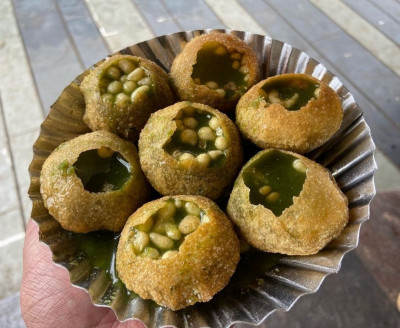 Almost every street and corner across the nation it is found, from a small street vendor to fine dining restaurants coming with its fusion varieties and versions of it.

It is India's favourite Pani Pura, or some might call it a Gol Gappa or Phuchka, Pani ka Bataasha or Patasha, Gup Chup, Phulki or Pakodi, the names are different, with a little variation in the taste but the love has remained the same for years.

But have you ever thought about where India's favourite street food came from?  Many believe the history of Gol Gappa or Pani Puri dates back during the time of Kingdom of Magah, which was one of the 16 Mahajanapadas (great kingdoms in Sanskrit) of ancient India.

However, there is another commonly believed origin of the Pani Puri. According to a legend, in the Mahabharata, Draupadi invented the Pani Puri.

How bizarre isn't it? It is believed it was a test given to her by her mother in law Kunti. During the Pandavas' period of exile, Kunti asked Draupadi to create a dish for all the 5 brothers using leftover aaloo sabzi ( potato) and a small quantity of dough.

Apparently, the idea was to see which brother would Draupadi favour the most. Draupadi, however, created pani puris . Impressed by her creativity, Kunti blessed the dish with immortality.

Whatever might be the history or origin of Pani Puri, we Indians love the lip smacking wonders filled with spices and tangy flavour with a hint of crunch at every bite.