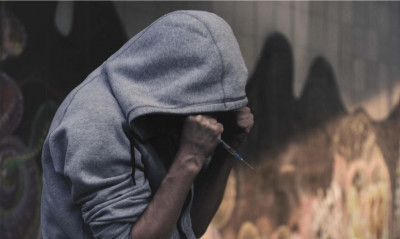 S*, a 23-year-old Kashmiri, trying to beat a three-year-long heroin addiction for the third time, sat with his legs crossed, looking down, unwilling to make eye contact when Article 14 met him at the main rehabilitation facility here in the summer capital of Jammu and Kashmir (J&K).


When we spoke to him at the Institute of Mental Health and Neuroscience at the Government Medical College, his pale face and yellow eyes betrayed the severity of Hepatitis C he had contracted from sharing a needle with his friend. Both his arms were scarred.


S’s descent into heroin, an opioid drug made from morphine, started in 2019 when he was a class-11 student in a government school in south Kashmir.


“If you look at my previous pictures, you would see how healthy I used to be,” he said. “It is not just an addiction but a deadly virus and extremely difficult to overcome. I have grown so weak. I want to leave this life behind me.”


As Unemployment Soars, So Does Drug Abuse


Experts said the pattern of drug use in Jammu and Kashmir—one of the most heavily militarised conflict zones in the world—has assumed “alarming proportions” since 2019, a period marked by social and political upheaval after Prime Minister Narendra Modi’s government abrogated J&K’s autonomy and demoted it to a union territory.


The rising pattern of drug use, said experts, was largely apparent among young people in J&K, which, apart from conflict, suffers one of India’s highest unemployment rates.


In May 2022, Article 14 reported how chemistry graduates and taxi drivers working at construction sites were a manifestation of its unemployment rate—at 25% in March 2022 almost three times the national average. More than a million are not even looking for jobs, thousands of which were lost by the revocation of the region’s special constitutional status, a security crackdown and Covid-19.