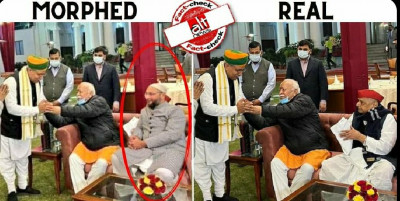 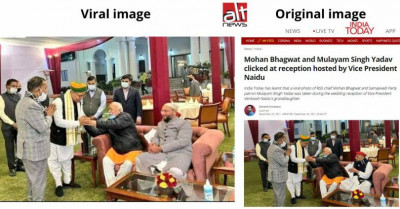 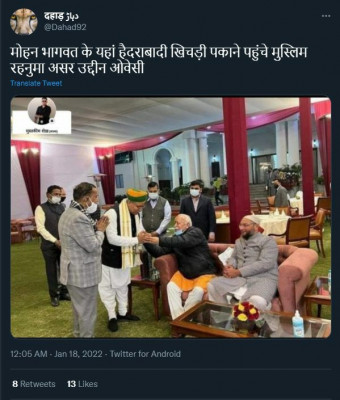 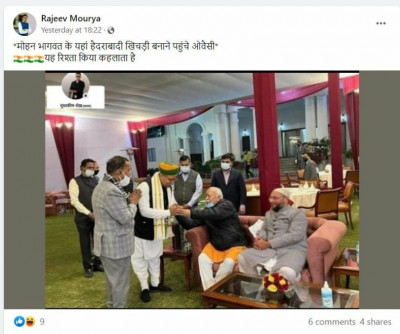 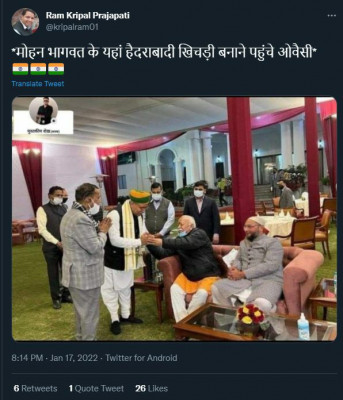 An image of RSS chief Mohan Bhagwat seated next to AIMIM president Asaduddin Owaisi has been shared on social media. The accompanying Hindi caption reads, “Owaisi arrived at Mohan Bhagwat’s home to prepare Hyderabadi khichdi.” In other words, it is implied that the two held a meeting ahead of the upcoming assembly elections in Uttar Pradesh.

Morphed image
Alt News performed a reverse image search and found the photo on a few news articles from December 2021. However, in these images, Mohan Bhagwat is not sitting next to Asaduddin Owaisi, but Mulayam Singh Yadav. According to India Today, the image was taken during the wedding reception of vice president Venkaiah Naidu’s granddaughter. Bhagwat is greeting cabinet minister Arjun Ram Meghwal.

Meghwal had himself tweeted the image earlier as Mohan Bhagwat giving him birthday wishes.

UP Congress had called out Samajwadi Party over the image which led to SP retaliating against the attack. Aaj Tak quoted SP national general secretary Professor Ramgopal Yadav as saying that those unfamiliar with social etiquette do not know Indian culture and keep reading into things unnecessarily. He added that if two people attend an event, they would converse with each other out of courtesy.

Furthermore, there have been no reports of Mohan Bhagwat and Asaduddin Owaisi meeting.