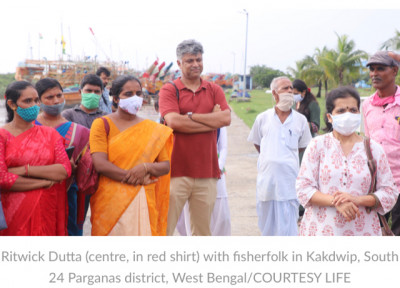 Over four years, a legal advocacy called LIFE lost each of about 70 cases it filed representing local communities against companies and government projects. In using the law to fight environmental battles over 20 years, they acquired persistence, fearlessness and, in 2021, won a global award often called the alternative Nobel. Co-founder Ritwick Dutta shares their rough, rewarding journey and the challenges ahead.

New Delhi: On 29 September, the Delhi-based Legal Initiative for Forests & Environment (LIFE) was named for the 2021 Right Livelihood Award, often called the alternative Nobel Prize. Over the past five decades, the award has gone to several environmental defenders in India—including the Chipko movement of the 1970s that saved trees in what is now Uttarakhand, the Narmada Bachao Andolan of the 1980s that agitated around displacement and ecological damage caused by big dams, and the Land for Tillers Freedom group that worked for land rights in Tamil Nadu—thus recognising the deep links between environmental protection and social justice across the subcontinent.

Since its founding in 2005, LIFE— with a multidisciplinary team of 21 staff, including lawyers, environmental scientists and researchers —has been at the forefront of environmental litigation and jurisprudence in India, with a majority of its clients constituting communities at the receiving end of projects that harm the environment, health and their livelihoods, often pushed through by breaking the law and running roughshod over their concerns.

The award citation lauded LIFE for deepening environmental democracy by assisting and empowering communities to “fight against some of India’s most significant environmental threats: the construction of ecologically destructive projects in violation of the law, preventing deforestation, and making industrial polluters pay for the damage caused to the environment and public health”.

First presented in 1980 in Stockholm, Sweden, the Right Livelihood Award has 186 laureates from 73 countries, raising their profile, popularising their solutions and protecting them when lives or liberty are endangered. It is funded by private donors and foundations.