S If the police are not here to protect people then better to defund them!

Police has no constitutional duty to protect you 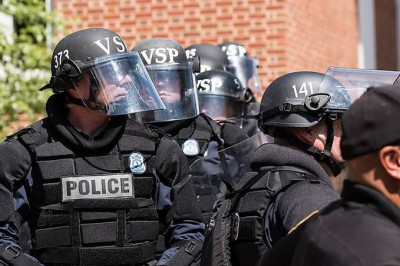 Police has no constitutional duty to protect you

Defunding the Police department is not the solution but funding them appropriately is!

Defunding the Police department is not the solution but funding them appropriately is!

Police departments have an oppressive and violent history. Defunding them could reduce violence against people and overall crime.

Now they have proved unworthy in the Robb elementary school shooting incident. American policing has never been a neutral institution. What the police did at the school was sheer negligence. They were supposed to protect, they were trained to protect the citizens. All they do is accuse the coloured people, and show hatred towards them Police departments are also often adorned with surplus military equipment, improving police firepower and the attitude that police use to escalate a situation but as in the school shooting never to save lives. So the question arises should the police department be defunded?

The police force we see has not grown in its attitudes over time. They still think their primary duty is to protect the wealthy and privileged white people. Even the reasons incidents showcase this attitude. According to an Aug. 20, 2019 study, black American men are 2.5 times more likely to be killed by police than white men; black women are 1.4 times more likely than white women.

Defunding the police could result in fewer crimes and less violence from police. If the police aren’t here to protect you, let them be given the least importance. There have been reform programmes after every incident. Reform programs come with more money and little accountability for police departments, continuing the historical cycle of oppression. Police are not trained and were not intended to do many of the jobs they perform. Defunding the police allows experts to step in.
Police currently deal with calls about mental illness, homelessness, domestic disputes, barking dogs, neighbours playing loud music, and various non-criminal activities, on top of actual violations of the law ranging from minor shoplifting by kids to speeding to murder. Most of these are community programmes done by the police. Further, defunding the police allows more money to go to community programs that prevent the need for police.