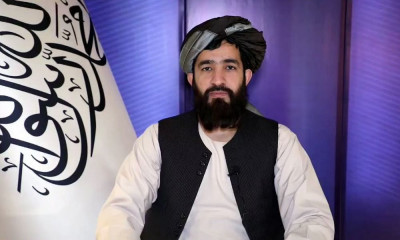 Islamic Emirate of Afghanistan (IEA) has said the international community should not sentence the people of Afghanistan to “collective punishment and starvation because they failed in their mission in Afghanistan.”

In an interview with Sky News, Afghan Foreign Ministry Spokesman Abdul Qahar Balkhi blamed the west for the ongoing humanitarian crisis in Afghanistan.

“From our part again, if we hadn’t taken the measures that we have taken and mitigated the effects of this humanitarian catastrophe that is taking place here in Afghanistan, I think we would have been in a far, far worse place at this moment,” Balkhi said.

He also reiterated IEA’s calls to recognize the current government in the country.

He stated that the IEA government is a responsible actor, “so the politicizing of recognition is only endangering the lives of the common people.”

Referring to Afghan women’s rights for education, Balkhi stated that girls are attending private institutions, “from primary all the way to university levels they’re open for girls and women.”

“I don’t know what the fear is, I absolutely do not know why, I do not understand any of the fear…. girls not going to school in their personal capacity or due to fear whether rational or irrational is their own personal prerogative.”

“From our side, the policy of the government has been obvious; there are absolutely no restrictions on any girls or women attending schools from primary all the way to higher education,” Balkhi said.

Balkhi, meanwhile, said that the Islamic Emirate forces respect Afghan women, and they do not “threaten women ever.”

“Our security [forces] do not approach women specifically because this is an Afghan society we have a lot of respect for women we do not threaten women ever.”