How to watch Real Madrid vs Barcelona live? 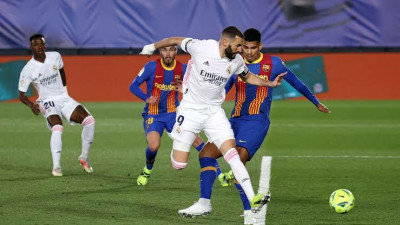 On Sunday, Real Madrid will host Barcelona at the Estadio Santiago Bernabeu.

After a 3-0 win at Mallorca on Monday, Carlo Ancelotti's side will be looking to extend their 10-point lead over Sevilla and their unbeaten run of eight games (W6 D2 L0).

Barcelona is third in the domestic league with 51 points, 15 points behind Real Madrid. They are undefeated in 11 games (W8 D3 L0) in all competitions. New signings such as Pierre Emerick-Aubameyang, who has seven goals in as many games, and Adama Traore have adapted quickly to their new surroundings.


How to Watch Real Madrid vs. Barcelona in El Clasico in the United States and other top European countries?

Each season, select matches will air on ESPN networks, but 100% of the matches will be available exclusively on ESPN+. ESPN+ will broadcast games in English and Spanish, with a small number of games also expected to be televised. Even televised games will be live streamed on ESPN+. 18-Feb-2022.

Even a decisive Barcelona victory would be unlikely to destabilise the title race, and the clubs will not meet again this season. Both have been knocked out of the Copa del Rey, and Barcelona has been relegated from the Champions League to the Europa League.