How I got fascinated with this wonderful martial art: Kalaripayattu 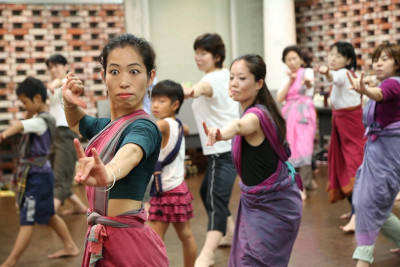 Thanks for sharing! Looking forward to the next part.🌟

More power to you!

These photos and stories are so interesting! Thank you for sharing🌞

Too bad this art is not more wide spread. It would be an interesting study.

Kalaripayattu is an ancient martial art originated in Kerala, India.

When I first took my children to India, my son was 7  and my daughter was 4. I was taking Bharatanatyam classes. My daughter too attended dance classes. My son was left out. He didn’t have much to do. In India, there is a lot to do for girls, I think.

They can shop and look around and find interesting things. But my son was mighty bored. And he was very active as well. That made think of putting my son into learning something that keeps him interested in it.

Kalaripayattu happened like that. Soon I found myself more interested in it than anyone else. It is physically intense, but very rewarding. First, I thought it would help me in my dance. Then I realized it is much more than that. It helps you focus more, concentrate deeply and bring in a sense of contentment.

I often think this. Japan is a land of martial arts and how martial arts connect the world. I am sure you have heard of Bodhidharma, a semi-legendary Buddhist monk who lived during the 5th or 6th century.  According to Chinese legend, he also began the physical training of the monks of Shaolin Monastery that led to the creation of Shaolin Kungfu. In Japan, he is known as Daruma. The legend is that he could have come from India. Now I take online karali classes four days a week. Trust me there is nothing like this!
I have learned my kalari lessons under my guru Shaji Jhon of at Shaji School of Kalaripayattu in Chennai, the South Indian state of Tamil Nadu.

My journey is continuing for ever!
And I’m proud of that face that real indian culture coming to Japan!

The beauty of culture is that we can share such beautiful things with each. It's educative. Its transformative.

I will talk more about it in the coming days.