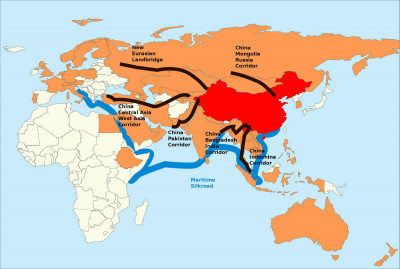 China has funded rail, roads and ports but has been accused of leaving some countries saddled with debt. The Commission chief said countries need "trusted partners" to design projects that were sustainable. The EU is looking at how it can leverage billions of euros, drawn from member states, financial institutions and the private sector. This will largely take the form of guarantees or loans, rather than grants. https://www.bbc.com/news/world-europe-59473071

China launched the belt and road initiative in 2013, but Von der Leyen was bullish that the EU could close the gap, although European spending was forecast to remain lower than the Chinese equivalent. “Yes definitely we are able to do that,” she said when asked. “Countries [had] their experience with the Chinese investments and they need better and different offers,” she said, adding that the EU plan was “a true alternative”.

She pledged the EU would take a different tack. “We want to show that a democratic, value-driven approach can deliver on the most pressing challenges,” she said, citing the EU’s priorities of a green economy and digital technology. Under the plans, the European Commission, the EU’s 27 member states and its lending arm, the European Investment Bank, would aim to generate €300bn in public and private funds by 2027, about €60bn a year. Possible projects the EU could support include green hydrogen, underwater data cables and spending in schools. https://www.theguardian.com/business/2021/dec/01/eu-infrastructure-fund-challenge-china-global-influence-asia-africa-eastern-europe-gateway

Global Gateway will require buy-ins from international institutions and the private sector as well. G7 countries developed a plan at the summit earlier this year in Cornwall to provide countries with an alternative to Belts and Roads. The commission acknowledged the trans-Atlantic roots of the plan on its website, noting, "Initiatives such as the Build Back Better World and Global Gateway will mutually reinforce each other." Global Gateway also hopes to spread European technology and expertise out in developing countries.