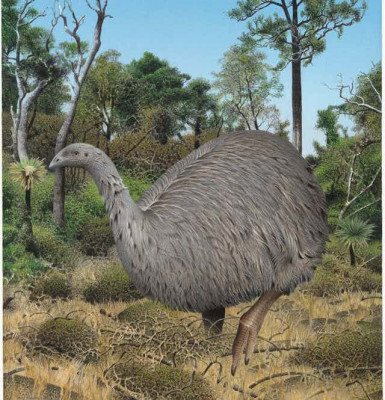 One species of iconic moa was almost wiped out during the last ice age, according to recently published research. But a small population survived in a modest patch of forest at the bottom of New Zealand’s South Island, and rapidly spread back up its east coast once the climate began to warm.

What we’re learning about this remarkable survival story has implications for the way we can help living species adapt to climate change, and how we conserve and restore what may be important future habitats.

Growing to around 80kg and up to 1.8 metres tall, the eastern moa was one of the smaller of the nine extinct moa species. It got its name because its fossil bones have been found in sand dunes, swamps, caves and middens all along the eastern parts of the South Island – Southland, Otago, Canterbury and Marlborough.

Eastern moa became extinct from over-hunting and habitat destruction by humans, and possibly predation by kurī (dogs) and kiore (rats). But were eastern moa populations thriving when people arrived, or were they already in trouble due to ancient climate change?
Refuge in the south

Between 29,000 and 19,000 years ago, New Zealand was in the grip of an ice age. Glaciers were much larger and more widespread than they are today, and the distribution of grasslands and forests changed as the climate became colder and drier.

Current climate change threatens the survival of many different species, and the same was true of climate change thousands of years ago. The fossil record hints that the ice age was bad news for eastern moa, as few eastern moa bones from this period have been discovered.

But a lack of fossils doesn’t necessarily mean a species was doing it tough. Perhaps they just avoided the caves and swamps where we might eventually discover their bones.