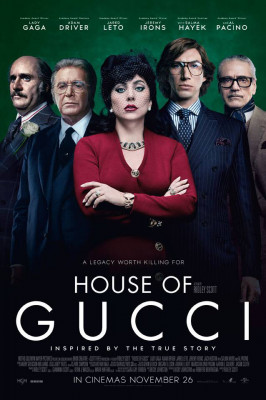 Read some criticisms on House of Gucci, quite normal when true stories become books or movies. I would say, it was straight-faced. Gucci clan ends mishandling their own world brand and people inside, you call family.

Things changed at Gucci home when Maurizio Gucci fell in love with Patrizia Reggiani. Rather she stalks him after meeting him at a party. In those scenes, looking at their deep love, we wouldn’t feel Patrizia is after Gucci wealth and fame. The guy Maurizio wins our hearts with his discreet behaviour and classy attitude. He is not influenced by the glory of family business. Also finds it difficult to deal with his formidable father, an actor before who lost in past. But the very Gucci man asks his son to leave home if he wishes to marry some woman doesn’t match Gucci criteria. House of Gucci’s conflict starts here.

Lady Gaga who played the central character Patrizia in this film brings in a dramatic disposition on screen in her Italian ways. She is smart and beautiful, who change over time in her approach to place her unambitious husband on top of Gucci empire. Glamour and greed is a deadly combo. Being called an ‘outsider’ in the family, she plays her cards to create rifts indoors and finally wins in changing her husband’s mind-set. But what in store for her determines the
plot.

I am impressed by Maurizio Gucci’s (Adam Driver)’s character depiction. Especially when he gets to see the other side of woman he loved once. His precise to the point conversations and actions, those oversized specs ..felt unique.

Aldo’s son, Paolo a frustrated designer at Gucci family seem bit insane to us is a solid character. Such ignored ‘types’ are not uncommon in famous clans.

There’s a big star-cast. I am delighted to see Al Pacino and Salma Hayek, both my favourites after a long gap. Call My Agent star Camille Cottin, another favourite also shares bit of screen time.