Horrors Of The Present: Snipers on the roof of the Supreme Court (Upper left) 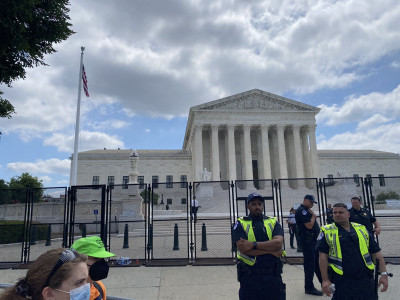 President Biden calls for protests to remain peaceful. “Threats and intimidation are not speech,” he says. However, there are snipers on the roof aiming at the protesters right now.

Roe v. Wade was overturned by the supreme court earlier today holding that there is no longer a federal constitutional right to an abortion. This resulted in massive outrage, and rightfully so. While President Biden has called for 'peaceful protests', there are snipers on the roof of the supreme court. The government was already prepared to take violent measures before the news even dropped. The violence was planned. The president allows violence against protestors while asking them to be peaceful.

What's the funniest thing about all of this is that these snipers are allowed to shoot pregnant people if they did anything that does not qualify as 'peaceful'. Tear gas used to halt a protest the an abortifacient. Cops are allowed to spray abortifacients on crowds if they want to. What does that say about the whole overturning of the roe?

They do not care even about the 'babies' in the wombs. They never did. It's a matter of power and authority where they want to strip away the rights of marginalized people. The elimination of pregnancy is not restricted, what's restricted is the choice of women to eliminate their own pregnancy. This is an act of fascism.

Roe. Miranda. Gun control. Church and State. All dismantled in a single week. It's a dark time for America. This is the horrors of the present.