5. Hindus Under Siege: The Way Out- A book by Dr Subramanian Swamy 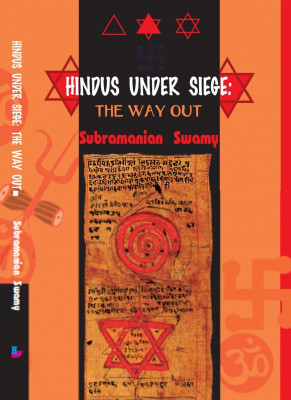 
Those who decry the need for an explicit and positive agenda are usually slaves of defunct ones. The Morarji Desai Government had such an unarticulated agenda. It consisted of four points: Prohibition, Ban on Cow-slaughter, Freedom of Religion Bill, and Revision of History Textbooks. None of the points of this agenda were inherently bad, but because the raison d’etre, or the fundamental premise of the agenda was not to raise the consciousness of the people but to pursue it as a law and order matter, the implicit Desai agenda came into disrepute and was then denounced as retrograde by Leftists in India, who are neurotic about any move to usher in anything resembling Hindu renaissance. During her long reign of 16 years, Mrs. Indira Gandhi too was an adherent of an implicit agenda which was a mixture of Mrs. Gandhi’s own noblesse oblige, and superstitious belief in tantrik practices. During Mrs. Gandhi’s reign, the so called God-men astrologers and Yagna performers proliferated, and thus the agenda boiled down to merely fossilizing existing religious practices and caste structures, and to deepening superstitious beliefs. During Mrs. Gandhi’s reign we got the worst of both worlds. On the one hand we failed to foster a positive attitude towards our heritage and civilization, and on the other hand we strengthened bodies which inculcated the narrow and obscurantist interpretation of living Hindu wisdom.

The lesson to be drawn from our past experience thus is that either India explicitly will have to adopt an agenda and make dynamic progress, or suffer an implicit defunct agenda, which will invariably be retrograde, and weaken the country. The items on this Agenda will constitute the Indian identity and goals, and will foster the renaissance. No nation can survive for long without a binding identity concept. Why was Akhand Hindustan partitioned in 1947? Or Pakistan split in 1971? Or the USSR disintegrated in 1991? Or Yugoslavia balkanised in 1996? Or, alternatively why were Germany [1989] and Vietnam [1975] re-united?