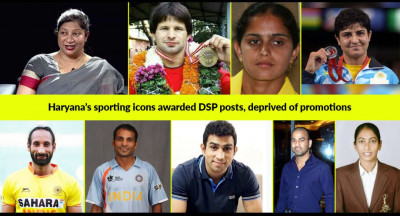 Over the years, Haryana has become the country’s sporting powerhouse, especially in the Olympic disciplines. It’s no wonder that even in the upcoming Tokyo Olympics, almost every fourth athlete in the Indian contingent hails from the northern agrarian state. Of the 127-member contingent, Haryana is contributing 30 players in five disciplines.

Haryana’s phenomenal growth in the country’s Olympic squad came about during the 2008 Beijing Olympics, with cash incentives and a deputy superintendent of police (DSP) job under the sports quota playing a pivotal role.

An officer’s position in the state police proved to be a huge motivation for the Beijing-bound athletes. Three boxers from the state – Vijender Singh, Akhil Kumar and Jitender Kumar – made it to the quarterfinals, with Vijender emerging as the country’s first boxer to win an Olympic medal (bronze).

As this boxing success placed Haryana on the world map, all three were made DSPs, along with wrestler Yogeshwar Dutt, who was also a quarterfinalist at Beijing.

Eventually, Vijender, Yogeshwar and Sandeep dropped the uniform to make their foray into politics. Sandeep is currently the state sports minister.

However, despite completing their police training and doing field duty, Sardara, Ramesh, Geetika, Surinder, Mamta Kharab, Joginder, Akhil, Jitender and Mamta Sodha have yet to receive their confirmation. They have even been deprived of a promotion, while peers in their batch have been promoted.

Olympic medallist Vijender Singh recently highlighted their plight on social media, while flaying the Haryana government for turning a blind eye to the issue.