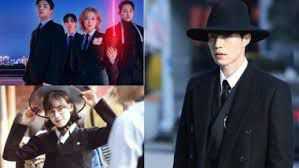 The mysterious beings of death, who come to escort the soul to the afterlife. Grim reapers have been featured in many works of fiction .We love them kdrama too , Here are some dramas featuring grim reapers which tell us important life lessons .

Black
Lo and behold the greatest grim reaper of all times no 444 he is snobish , arrogant and looks down on humans ,but him trying to adjust to mundane life is hilarious. Tha s drama is must watch

Tomorrow
Adopted from the webtoon of the same name .It gives a corporation turn ,to the whole grim reaper thing .The main trio is so chaotic but their teamwork is awesome when they come together.