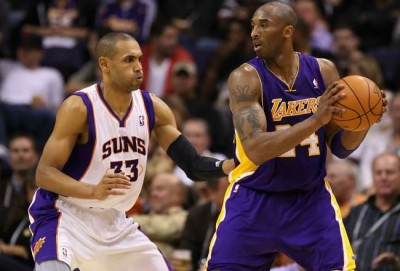 Los Angeles Lakers legend Kobe Bryant hit some tough shots throughout his 20-year career. It seemed like most of them were against the Phoenix Suns too, including a ridiculous shot over Grant Hill when the Lakers played the Suns in the 2010 playoffs.

On the road to his fifth title, Bryant averaged an absurd 33.7 points, 8.3 assists and 7.2 rebounds against Phoenix in the Western Conference Finals. The performance is one of Bryant’s most famous in the playoffs, with former Laker and Suns player Jared Dudley calling him unstoppable in the series.

While Dudley checked Bryant at times, Hill was Bryant’s primary defender throughout the series. He reflected on Bryant’s clutch 3-pointer to seal the Game 6 victory in Phoenix, saying Kobe is the best player he’s every guarded on Showtime’s All The Smoke podcast.

The shot not only became memorable due to its degree of difficulty but because of what Bryant did after. He slapped Suns head coach Alvin Gentry on the behind, almost telling him “nice try.”

Hill could not have played any better defense on the possession. He didn’t fall for the pump fake. He entered Kobe’s space even more after the fake and contested it as much as possible without fouling. Bryant managed to drain the fadeaway three to secure the win, leaving Hill in awe.

Hill called Kobe “the best player he played against,” mentioning he never matched up against Michael Jordan though. Hill, however, has said before that Bryant made more tough shots than Jordan.