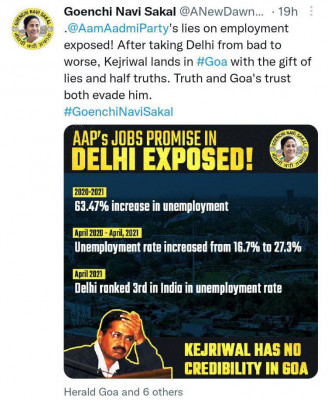 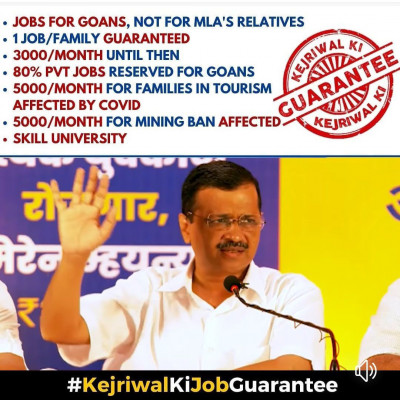 A new pro-TMC Twitter handle for Goa attacks AAP by saying its job promise for Goa stands exposed as Delhi ranks third in unemployment. It states with a tone of finality Kejriwal has no credibility in Goa. TMC itself has no solution to Goa’s mystical unemployment problem.

The monthly Centre for Monitoring of Indian Economy CMIE figures states that in September end Goa had a 7.4% unemployment rate whilst Bengal had 6.8% and Delhi had 16.8%. How I-PAC groomed AAP could get the issue of employment wrong in an era of fudged data and questionable statistics is anybody’s guess.

Goa’s ruling BJP has promised to create over 50000 jobs over the past decade but failed to fill up over 50% of the existing routine jobs. Giant AAP billboards in Goa scream that Goan youth laid off by mining closure, tourism lull will get Rs 5000 each. TMC/I-PAC meanwhile offers full time paid work opportunities to drive on-ground political campaigns. Nobody says where will the money come from in a state where each month’s paycheck of Govt Expenditure is made by selling Govt Bonds as the economy grinds on.

Assembly 2022 in Goa has become a trip to la-la land. Both migrant-friendly TMC and AAP try to woo Goan voters who are angry that their jobs have been given to non-Goans, with sops and stats from back home. None of the party think tanks in Goa including the incumbent BJP or aspirant INC or GFP talks about the economy or how will the money come for giving unemployment doles to lakhs of Goan youths or where are the jobs are as well?

For the moment, Electionjeevi political parties pump in money to intoxicate youth in a false sense of employment and promise of an assured future when their parties win, if the economy is fine that is.