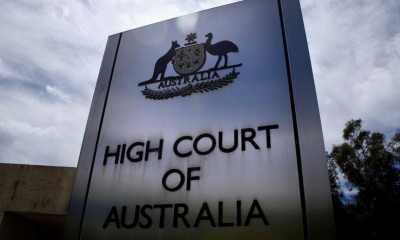 Parliament should have the power to define “aliens”, including to allow the deportation of Aboriginal non-citizens or even dual nationals, the Australian government has argued.

The solicitor general, Stephen Donaghue, made the submission on behalf of the commonwealth in a high court appeal seeking to overturn an earlier ruling that Aboriginal people cannot be deported, even if they lack Australian citizenship.

At a hearing on Wednesday, the commonwealth urged the court to junk the landmark decision of Love and Thoms handed down in February 2020 or, if it is accepted, to rule that people without Aboriginal biological ancestors are not exempt from deportation.

In November, the federal court ordered the release of Shayne Montgomery, a New Zealand citizen who has argued that because he is culturally adopted as Aboriginal he cannot be an alien for the purposes of the constitution.

The immigration minister, Alex Hawke, has appealed to the high court and in doing so sought to reopen Love and Thoms on the basis it was wrongly decided.

The case is an important test not just of whether Aboriginal people can be aliens, but the circumstances in which the court will revisit one of its own decisions.

On Wednesday Donaghue argued that the parliament should have the power to define “aliens”, unless it seeks to exclude people who “could not possibly answer that description”, such as people born in Australia.

Justice James Edelman asked if this meant that parliament could define a person born overseas with dual citizenship due to an Australian parent or grandparent who had “lived in Australia as a citizen for 60 years, served in the military, voted, and fulfilled every civic duty” as an alien.

Donaghue said this was an “extreme example” that was politically “unlikely” but, yes, parliament would have that power – subject to one qualification, that it may not be fair to be ejected from the Australian polity if it was not possible to renounce foreign citizenship.

Justices Edelman and Michelle Gordon appeared to take issue with parliament being allowed to define who is an “alien”.