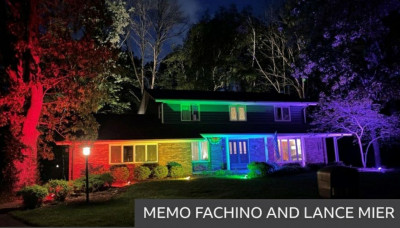 The house in Racine, Wisconsin, belonging to Memo Fachino and his husband Lance Mier

A gay couple in the US state of Wisconsin have created an online buzz with a social media post explaining why they lit up their home with rainbow-coloured floodlights.

Memo Fachino, 35, and his husband Lance Mier, 36, were told to remove a Pride flag from their porch after new rules were introduced in their neighbourhood.

In a post on Reddit last week, the couple said they took advantage of a loophole to then install the lights. Their post has since gone viral.

In it they explain that their local housing association in the city of Racine recently imposed restrictions on displaying flags outside homes "due to some neighbours flying BLM [Black Lives Matter] flags, thin blue line flags [often used to show support for the police], and other opinion flags".

The new rule, the couple write, permits residents to fly only the US flag.

The couple said they received an email informing them they had to remove the rainbow flag - which had been displayed on their porch for the past five years - after it was reported to authorities ahead of Pride month, an annual celebration that supports the LGBT community.