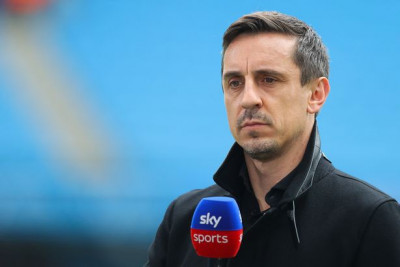 Sky Sports pundit and Manchester United legend Gary Neville expressed his discontent surrounding the club’s performance. Even after the appointment of Erik Ten Hag as the new manager, still United presented an underwhelming performance against Brighton, succumbing to a 2-1 defeat on Sunday.

"They are the easiest team to play against in the league - that's a massive worry. The openness of them is unbelievable: said Neville

"It will have been a shock to him [Ten Hag] after a promising pre-season.

"But anyone who has watched those Manchester United players he has been handed will recognise that is a familiar performance and the people above him should have known that was an unacceptable situation to hand Erik ten Hag that squad.

"It needed improving more than it has been. There is still time in the window but he needed three or four weeks more to work with them.

"Every coach comes in thinking they can do better than the last coach with the players at his disposal as they believe they are a better coach and that is probably the case with this. But the reality is, he's seen what those players are capable of today.

"Those players had a good season when the fans weren't in the stadium during Covid but when the fans came back, the team now can't come from behind in games.

"I don't think any Manchester United fan or pundit that has watched this team over the last 12 months, with the same players playing in the same positions, expected anything different that what we saw.

"Ten Hag will be disappointed because he saw positive signs in pre-season but the reality has hit home.

"The coach needs time so I won't have a go at him. And it comes a time where I won't even have a go at the players anymore. If you have a business and the people in that business can't do the job for you then you remove them from the business.

MORE: Part 2 of this interview is in the support section