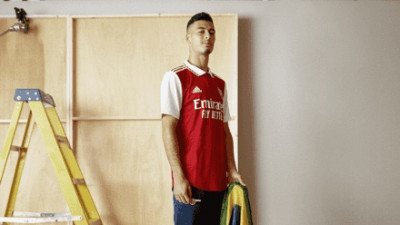 Regardless of what happens in Qatar, Gabriel Martinelli is already a winner with Brazil.

The most successful nation in the history of the World Cup might not have gotten their hands on the famous trophy since 2002, but they were celebrating last summer when their under-23 side took gold in the prestigious Olympic football tournament at the delayed 2020 event in Tokyo.

Gabi was part of the victorious squad. It was only the second time the football-obsessed nation had won Olympic gold – retaining the title they won in Rio de Janeiro in 2016 – but like many of the players who were part of that squad last summer, he now has his eyes on the biggest prize of them all in Qatar.

The likes of Bruno Guimaraes, Antony and Richarlison have all joined Gabi in moving from the Olympic squad to the senior selection, while elder statesman Dani Alves - now 39 years old - also brings his incredible experience to the side again, having been one of the over-age picks in Tokyo.

"The whole experience was fantastic, the level was high of course, but I didn’t feel out of place"

Gabi said being surrounded by so many world-class talents while on international duty is invaluable for his development.

“I was so happy when I was selected to be part of it in Japan,” he recalls. “The whole experience was fantastic, the level was high of course, but I didn’t feel out of place.

“I remember my dad always liked Dani Alves who has won just about every title there is, so it was amazing to go to the Olympics with him. You need to learn from players like that, look at how they behave and how they are in the dressing room, it’s a great example. It’s a gift, and it gives you more confidence as a player.”