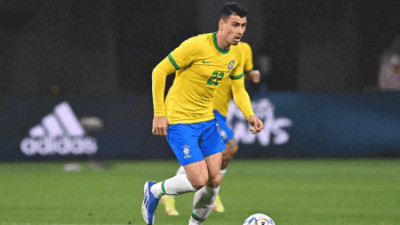 Gabi, who joined Arsenal from Sao Paulo side Ituano in 2019, had never represented his country at any level before that Olympics, though had been involved in previous squad selections and had trained with the senior side.

It wasn’t until the beginning of this year though, that he made his full debut for A Selecao in a World Cup qualifier win over Chile. Brazil had already booked their place in the finals, but continued to dominate the South American qualifying section in style, running out 4-0 winners in the famous Maracana Stadium last March.

Gabi came on as a late replacement for Real Madrid’s Vinicius Junior and did enough to be called upon again in the next qualifier, playing the last 36 minutes of a 4-0 win away to Bolivia. Then in the summer, he won his third cap in a friendly away to Japan, playing his part in a 1-0 win – coming on alongside Gabriel Jesus for the last half hour.

With such a wealth of attacking talent available to head coach Tite, his selection for the World Cup squad was far from certain, despite his excellent form for Arsenal over the past 12 months or so. But on November 7 he was named among the 26 players who will be hoping to lift the World Cup for a sixth time.

Gabi was just one year old when his nation were last world champions, but as a Brazilian, he has naturally been brought up watching the tournament every four years.

“I was five for the 2006 World Cup, and I remember watching that, but my favourite memory of the World Cup is 2014, because it was in Brazil,” he said.

“I especially remember that goal scored by David Luiz, remember the free-kick against Colombia? I watched it at home – what a goal that was.”

This time though, he won’t be watching at home. He’ll be part of the action, hoping to create his own memories in Qatar, and become the golden boy of the new Brazil generation.