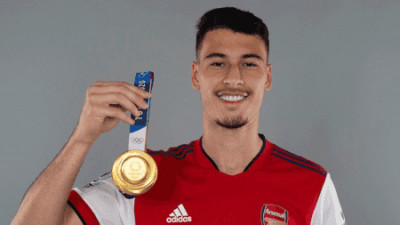 Drawn in Group D with Ivory Coast, Saudi Arabia and Germany, the Brazilians stormed to top spot with two wins and a draw, Gabi featured in the last two group games from the bench. He watched the quarter-final win over Egypt from the bench, then was called upon in the second half in the semi-final against Mexico.

“Growing up I always dreamed of playing for Brazil and representing my country, but to be honest I never thought the dream would become possible"

He couldn’t help find the breakthrough though, and it went to penalties for a place in the gold medal match. Just a few weeks after his 20th birthday, Gabi was the second man up to take a spot kick, after Alves had converted the first. He kept his nerve against experienced keeper Guillermo Ochoa, and Brazil went on to win the shootout 4-1.

“I went to Tokyo to play and be part of it,” Gabi said, “and it was great to make a contribution. I asked the coach if I could take one of the penalties and I was confident to step up. I had taken penalties before, against Liverpool in the Carabao Cup for example, so it wasn’t my first one.”

Gabi didn’t feature in the final, but Brazil’s 2-1 extra-time win over Spain meant that he was presented with a gold medal at full-time, a proud moment for the whole Martinelli family.

“It’s a huge honour to win an Olympic medal,” he said, “and who knows maybe I can win another one in Paris [in 2024]! It was a wonderful experience, I cannot tell you how amazing it was, I want to thank all the fans who were behind us.

“Growing up I always dreamed of playing for Brazil and representing my country, but to be honest I never thought the dream would become possible. My family loves the Olympics, of course they all love football but my mum especially loves the Olympic sports like volleyball a lot too, and I used to watch it with her always.”