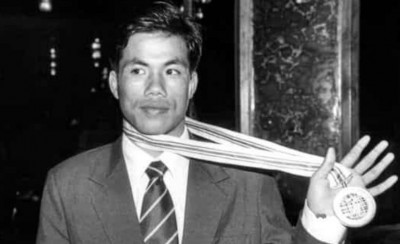 As they say the hardest battle is to fight with oneself...this story has moved me....🥺✨

As they say truth is stranger than fiction!

From attempting suicide to inspiring generations of boxers, the story behind Dingko Singh’s 1998 Asian Games triumph

Late Dingko Singh’s golden triumph in the 1998 Asian Games had inspired generations of boxers. But whenever the Dingko’s Bangkok Games’ feat is discussed the first thing that came across the mind was dropping of his name from the squad and then inclusion at the last moment.

He passed away due to liver cancer on June 10.
Remembering Dingko’s stint in the camp and the memorable Bangkok Games, then national coach Gurbax Singh Sandhu had said, “If Dingko was a stubborn and adamant boxer, but at that same time he was emotional too. I still remember when the news of dropping him from the Asiad broke in the morning, a day before the boxing contingent had to leave National Institute of Sports (NIS) Patiala for Delhi, he became upset and drank (referring to liquor) too much. He even tried to commit suicide. While he was trying to jump from a flyover near the Railway Station, some passersby caught hold of him and stopped him from jumping. Then he went to the railway station and was going towards the railway track to attempt suicide again, when someone from the NIS spotted him and brought him back to his hostel.”

“I was near Jalandhar to pay obeisance at Johla Pind Gurudwara Sahib when I got a message about Dingko getting out of control. I told the coaches to lock him in his room. By the time I had spoken to then federation’s president AK Mattoo and he assured me that he would take up his case with the Indian Olympic Association. In the evening when I reached Patiala, I went straight away to Dingko’s room and told him to pack his bag. Initially he was reluctant and straightaway refused that now he wouldn’t be going to Bangkok. But later he agreed,” Sandhu had said. “Mattoo sahab was the person because of whom he was able to compete in the Asian Games. He went on to beat the world’s top boxers to win Asian Games gold for India after a gap of 16 year."