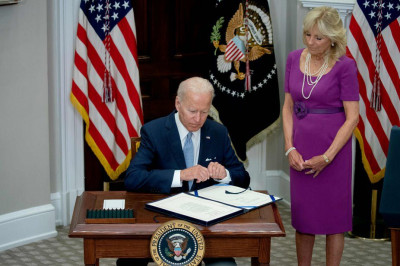 President Joe Biden signed into law on June 25, 2022, a bipartisan bill that is the first significant change in federal gun legislation in nearly three decades.

Known as the Bipartisan Safer Communities Act, the bill qwas written in response to the shootings in Buffalo, New York, and Uvalde, Texas, and sped through a usually slow-moving Congress.

Though the bill’s limited scope has left many disappointed, it does tighten up gun control in a number of key areas.

As the bill was making its way through Congress, The Conversation published a number of articles looking at its provisions and how effective they might be in addressing America’s gun violence crisis.

LaGrange College political science professor John A. Tures writes that these laws allow police to take guns from people deemed a threat to themselves or others and bar them buying firearms.

To determine if red flag laws reduce gun deaths overall, Tures examined states’ firearm death rates, in light of whether they had a red flag law or not, in each of three years – 2018, 2019 and 2020.

“In 2020, if there were no red flag laws, I estimate that 52,530 Americans would have died in gun deaths. The number actually recorded was 45,222, indicating red flag laws saved 7,308 American lives that year,” Tures writes.