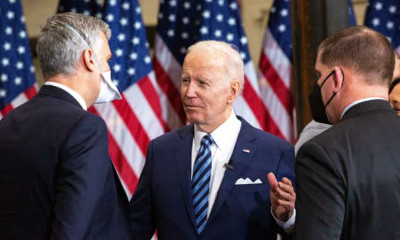 When President Joe Biden met in the Oval Office on Friday afternoon with Sauli Niinisto, president of the neutral but increasingly nervous Finland, Biden tried to put his guest at ease with a little banter recalling something that Barack Obama once said.

“President Obama used to say, ‘We’d be all right if we left everything to the Nordic countries,’ Biden recalled. “Everything would be fine.”

It was an exchange that captured how diplomacy has changed in the past nine days, since the Russian invasion of Ukraine rocked the way Europeans talked about Russia. Before that, President Vladimir Putin’s Russia was an unpredictable force to be managed, especially for a nation like Finland, which was ruled by Russia for most of the 19th century, until the Russian Revolution in 1917.

Now, the country responsible for the term Finlandization, a Cold War expression that is not recalled fondly by the Finns, is rethinking its relationship with Washington, NATO and the West. Its streets are a mix of Nordic and European cultures, its politics increasingly tilted to the West. The invasion of Ukraine has made it consider seriously, for the first time, whether it should be a member of NATO.

But in their brief public appearance together — during which both leaders expressed a desire to strengthen what Niinisto called the “long-lasting partnership” between their countries — neither one mentioned the possibility of Finland joining the Western alliance. That appeared deliberate. Even if the Finns decided to try to make the leap to full NATO membership — which still seems a reach — figuring out how they would move from their current neutrality to formal membership is beyond tricky.

The problem, as one European diplomat said, is the period of vulnerability between the time Finland would declare its interest in becoming a full NATO member and the time it came under the protection of the alliance, and its Article 5 assurance that an attack on one is an attack on all. The diplomat spoke on condition of anonymity to relay private discussions.