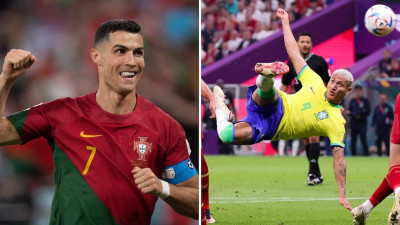 We have seen quite a few exciting games in the FIFA World Cup already. Now that all the participating teams have played one game in the competition, let's do a quick review of some key games.

FIFA World Cup 2014 finalists Argentina and Germany both lost in the opening round to Saudi Arabia and Japan respectively. Both these teams now have a mountain to climb in front of them. Argentina will face Mexico and Poland next whereas Germany will go up against Spain and Costa Rica. Can we see an early exit?

England, Spain, Brazil, and France all won their opening games. These sides looked quite good on the ball and we can expect them to get even better as the tournament progresses!

Having led Portugal to a 3-2 win over Ghana, Cristiano Ronaldo became the first person to score in 5 separate WCs. Portugal survived a late surge from the Black Stars to start their campaign with a win. They face Uruguay next in what should be a physical encounter!