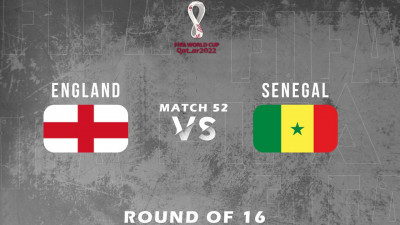 The match between England and Senegal will be their first-ever senior international. The first match England has ever played against a country will take place in the World Cup for the thirteenth time; the Three Lions have only lost one of the previous twelve (W7 D4), a 0-1 loss to USA in 1950.

In their six World Cup encounters with European opponents, Senegal has alternated between winning (3) and losing (D1 L2); their most recent match ended in a loss against Netherlands by the score of 2-0. (MD1 of this tournament).

Senegal are inadequately prepared to withstand an assault from England's effervescent front line, assuming Southgate's team plays to their full ability. Senegal have conceded at least once in each of their first three games.

In the gulf countries, FIFA World Cup 2022 games will be broadcast live in English and Spanish on FOX Sports (FOX and FS1). Additionally, spectators in gulf countries will have access to Livestream on beIN SPORTS. In India, England vs Senegal will be televised on the Sports18 Network. Indian Fans can live-stream the match on the Voot Select and Jio Cinema app.