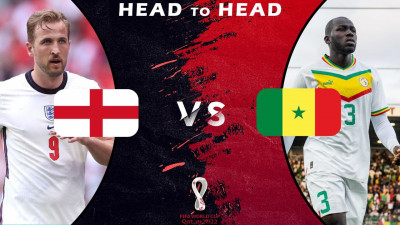 For the thirteenth time in the history of the World Cup, England will play its first-ever game against another nation; in the previous twelve games (W7 D4), the Three Lions have only lost one (a 1-0 defeat to the USA in 1950).

Senegal have fluctuated between winning (3) and losing (D1 L2) in its six World Cup matches versus European opponents; their most recent match resulted in a loss to Netherlands by a score of 2-0. (MD1 for this competition).

England vs Senegal Head to Head

Both sides will be motivated to start their rivalry on a strong note given they have never played each other before.

If England triumphs, it will be the first time since 2002–2006 that they have advanced to the World Cup quarterfinals in back-to-back tournaments.

Marcus Rashford of England has three goals thus far in the 2022 FIFA World Cup, which is the most of any player. In the competition, he has only made one start.

Since Sir Bobby Charlton in the 1966 World Cup, the 25-year-old from Manchester United has become the only player to score three goals for England in a major event.

He scored England's 100th World Cup goal with his second goal against Wales. Harry Kane, the captain of England and 2018 Golden Boot winner, has yet to score at the 2022 FIFA World Cup. But in three games in Qatar, he has already picked up three assists.

Senegal has just once before in this event advanced to the World Cup knockout stages, when they last played, their captain was current manager Aliou Cisse (in 2002).