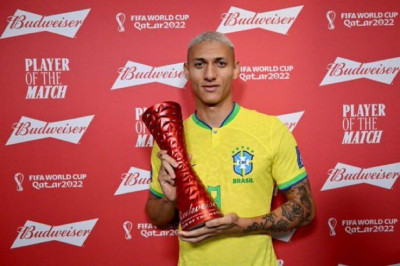 Allison (6/10): Had nothing to do throughout the game. Was a spectator aside from his passing.

Alex Sandro (7.5/10): Completed the highest number of passes in the game and was a threat going forward for Brazil. Unfortunate to hit the woodwork in the second half.

Thiago Silva (7/10): Didn't have much to do, considering Brazil's possessive dominance. Was instrumental in Brazil's build-up from the back.

Marquinhos (6.5/10): Brazil's midfield domination gave him little to worry about for most parts of the game. Did well when he was called upon.

Casemiro (8/10): Played as Brazil's controller in the middle of the game. With 56 passes completed, he was a constant threat at the Serbian goal.

Lucas Pacqueta (7/10): Kept things tidy in the middle of the park throughout his time on the pitch.

Vinicius Jr (8/10): Ran riot on the left wing, being a threat with his dribbling and his pace. Good pass for Richarlison's world-class goal.

Neymar Jr (6/10): Was largely ineffective throughout the game, unable to influence the match from central areas. Went off injured in the 80th minute.

Raphinha (6/10): Missed a big chance earlier in the game and was unable to influence the game as expected.

Richarlison (9.5/10): Clinical in front of goal, with his two shots leading to goals for his side. His overhead kick in the game's closing stages has arguably been the tournament's best goal.

Fred (7/10): Energetic cameo from the Man Utd man, testing the goalkeeper once.

Gabriel Martinelli (5/10): Too little time to make an impact.

Rodrygo (6/10): Good cameo performance from him