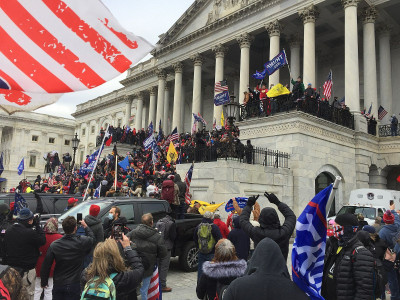 Twenty years ago, the US was on red alert against an enemy that was outside. Today, the fencing around is US Capitol is to be reinstalled to avoid a repeat of violence during Saturday’s rally to demand “justice” for those arrested for the January 6 riots there.

Fencing around the Capitol building in Washington DC – which houses the US Congress and the legislative branch of the federal government – had come up after the worst attack on it: A mob of some 800 people ransacked the place, lawmakers had to be evacuated, and five people were killed. [https://edition.cnn.com/2021/01/07/us/trump-supporters-capitol-riot/index.html]

They were egged on by the outgoing President Trump who called for action against “stealing” the election. From far-right groups like Proud Boys, the ‘stolen election’ theory has moved to the mainstream conservative groups, and the Republican Party is yet to shake it off. It has been aided by many conspiracy theories courtesy online forums under the banner of QAnon. [https://www.voanews.com/usa/capitol-riot-exposed-qanons-violent-potential]

The rally has been organized by far-right groups who believe those arrested for the rioting were nonviolent bystanders and they are “political prisoners.” Capitol Police is taking precautionary measures, gauging the potential of violence during the ‘Justice for J6’ rally, even if some experts predict it will be a “dud”. [https://www.washingtonpost.com/dc-md-va/2021/09/13/fence-dc-rally-j6-capitol-riot/] House Speaker Nancy Pelosi, who also held a security review Monday, accused the rally organizers of “coming back to praise the people who were out to kill.”

The fencing is emblematic of a transformation the US had undergone over two decades. Critics and former officials fear the next 9/11 may come from within, given the level of hate on the far right. [https://www.washingtonpost.com/local/twenty-years-ago-we-feared-foreign-enemies-now-we-need-fences-against-fellow-americans/2021/09/13/9c570f7c-14bf-11ec-9589-31ac3173c2e5_story.html]

The fear is shared by many outside the Democrat-Liberal-Left camps too. On the 9/11 anniversary former President George W Bush made the same pitch in his speech [https://edition.cnn.com/2021/09/11/politics/transcript-george-w-bush-speech-09-11-2021/index.html]: “There is little cultural overlap between violent extremists abroad and violent extremists at home. But in their disdain for pluralism, in their disregard for human life, in their determination to defile national symbols — they are children of the same foul spirit and it is our continuing duty to confront them.” [https://www.youtube.com/watch?v=5xL6eaiM14o]