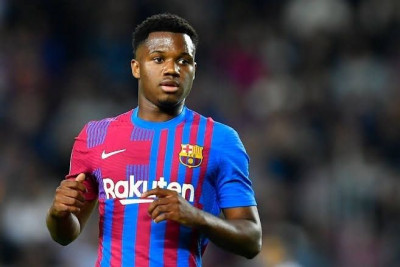 The highly-rated forward has seen a move to the Premier League speculated on in the
past, but he is now working on a new contract with the Catalans.

Ansu Fati is now on the back of signing a contract that includes a 1 Billion Dollar release
clause, fully committed to Barcelona and has no intention of making a move away from
Camp Nou any time soon.

The 19-year-old has been generating interest for some time, since bursting into the
senior stage in Catalunya alongside former team-mate Lionel Messi, the youngster is
said to have Premier League suitors.

He did, however, commit to fresh terms with La Liga heavyweight back in October 2021
and insists a big-money transfer does not form part of the immediate future.

Will Ansu Fati be staying in Barcelona?

The talented teenager, who is back in action at present after shacking off another
untimely injury, has told in a press conference that when asked if he has ever thought
about taking on a new challenge, “No, honestly. Barca has given me everything. That is
my club.”

“My ambition is to win titles with Barcelona. To achieve that for the club and the fans is
my number one goal. If this means, I also achieve personal records, then amazing. I’ll
work hard and stay dedicated. Hopefully, trophies and records will come after that.”

A hot prospect that made his senior debut for Barcelona in August 2019, is another
famed product of the La Masia academy system.

He joined those ranks in 2012, as Messi was guiding the Blaugrana to La Liga title glory
and himself to a fourth consecutive Ballon d'Or.