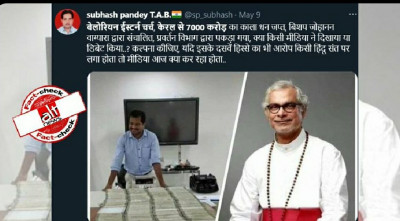 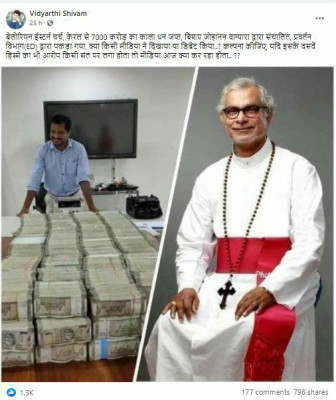 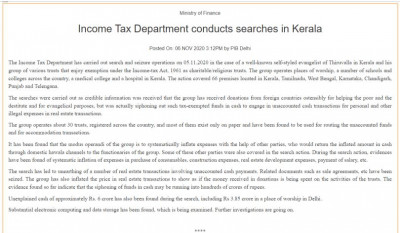 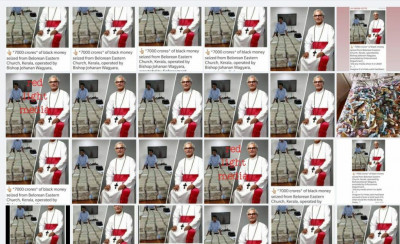 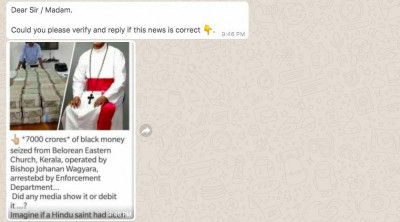 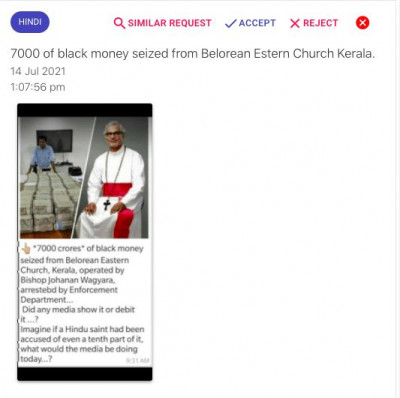 A viral claim suggests that Rs 7,000 crore was recovered from Believers Eastern Church in Kerala during Income Tax raids. An image of bundles of currency notes on a table has been shared to support the claim. Alt News has received multiple verification requests on its WhatsApp helpline number (+91 76000 11160) and official mobile application. It is noteworthy that the name of the church has been misspelt as ‘Bolorean’ Eastern Church. The claim also suggests that Bishop Johanan Wagyara was arrested by the Enforcement Directorate. The claim is viral on Facebook.

Alt News has also received verification requests for the claim.

The same claim was widespread earlier in May. Twitter user Subhash Pandey T.A.B. drew over 3,000 retweets for his post.

Fact-check
Alt News performed a keyword search that led us to news reports from last year. Believers Church in Kerala’s Thiruvalla was raided by Income Tax officials on November 5, 2020. The Hindu reported, “An official statement said the searches followed credible information that the group had received donations from abroad ostensibly for helping the poor and for evangelical purposes.” The New Indian Express stated that raids were conducted at “66 premises of the church which include its headquarters and a medical college hospital run by the church at Tiruvalla”. The outlet quoted the official statement of the IT department stating that Rs 6 crore was recovered during the search, including Rs 3.85 crore unexplained cash found at a place of worship in Delhi.

A press release by the ministry of finance issued on November 6, 2020, also said that Rs 6 crore were seized during the raid.