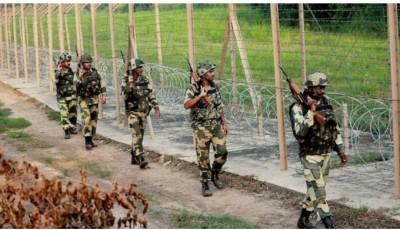 Union home ministry's decision to extend the area under jurisdiction of the Border Security Force - basically the area where the force will have powers of arrest, search and seizure - to a 50 km-belt from border in West Bengal, Punjab and Assam - has become a political issue turning into a latest flash point between opposition ruled states like Punjab and Bengal and the centre. Eariler the BSF jurisdiction was upto 15 kms in the three states.

Times of India's Bharti Jain reported that the "border stretch under BSF in Gujarat stands reduced to 50 km from 80 km earlier, while the area remains the same in Rajasthan at 50 km. As was the case earlier, no such limit has been prescribed for the five north-eastern states of Meghalaya, Nagaland, Mizoram, Tripura and Manipur or the Union territories of J&K and Ladakh".

Jain also reported that as per the latest notification issued by the home ministry on Monday, the BSF will derive its power to search, seizure and arrest under Acts like Passport Act, NDPS Act, Customs Act etc as well as Criminal Procedure Code (CrPC).

As was expected, Punjab Chief Minister Charanjit Singh Channi was quick to denounce the move, calling it a "direct attack on federalism".

He urged Union Home Minister Amit Shah to immediately roll back what he termed as irrational decision.