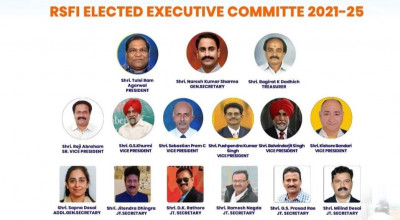 Tulsi Ram Agarwal and Naresh Kumar Sharma have been re-elected as the president and general secretary, respectively, of the Roller Skating Federation of India (RSFI) – the governing body of the roller sport in the country – during the federation’s annual general body meeting held in Delhi on July 18.

Bagirat K Dadhich has been elected as the treasurer of the federation.

Out of the 15 members elected in the new executive committee of the RSFI for a four-year term (2021-2025), 12 have been elected unanimously and the voting has been done for three posts – president, general secretary and treasurer.

The total strength of the RSFI’s Electoral College is 38, two votes each for the 19 affiliated units (state and union territories).

In the elections, 36 members took part in the voting and the trio of Tulsi Ram, Naresh Kumar and Bagirat K got over 90 percent of the total valid votes.

“Our focus is to increase the base of the sport in the country. Already the sport is popular in many states across the country, but we will work on popularizing in every state and union territories,” says RSFI president Tulsi Ram Agarwal. “India is one of the dominant countries in the Asian continent and the target for the next four years is to make our impression in the world arena.”

The roller sport discipline has got two Arjuna awards. Naman Virendra Parekh was the first skater to get the prestigious Arjuna award in 1987.