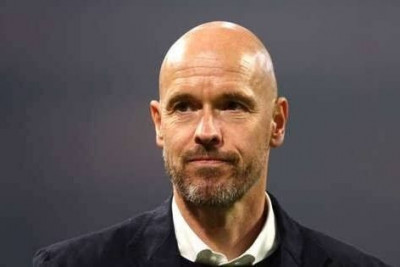 As he departed Selhurst Park on Sunday, the new Red Devils manager declined to answer the
reporter's questions.

After the Red Devils were defeated 1-0 by Crystal Palace in the season's last game, the Dutch
coach was seen exiting Selhurst Park.

Sky Sports attempted to interview Ten Hag but was rebuffed by his security guards.

On Sunday, Erik ten Hag attended his first match as Manchester United manager, but he
showed no signs of rushing into his media duties.

The former Ajax coach has been at United since May 16 and is hoping to have a much better
season in 2022/23.

However, Ten Hag was not in control of team selection on Sunday, as interim manager Ralf
Rangnick took over for the final time.

"Welcome to the Premier League, Erik," Cotterill remarked, but Ten Hag ignored him.

After that, a security guard placed himself between the new United CEO and the journalist.

"Are you looking forward to getting started?" Cotterill asked Ten Hag twice before being pushed
aside by security.

Cotterill then turned to the bodyguard and said, "Please don't bother me; you're on TV." It's not looking good. "

Without saying anything to Cotterill, Ten Hag climbed into the rear of a black sedan.

He was perhaps partially dissatisfied with a poor performance that demonstrated how much
work he still needs to do to return United to the ranks of Manchester City, Liverpool, and Chelsea.

Against his previous team, Wilfried Zaha scored the game's only goal. Bruno Fernandes' blunder allowed the Ivorian to slip past Diogo Dalot and catch David de Gea off guard with a superb finish.