Dude, is there a Goa Congress leadership? 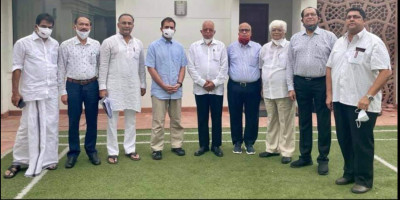 The great divide while the entire veteran Congressmen of Goa stood on one side of Rahul Gandhi, GPCC President stands insulated & protected amongst AICC functionaries 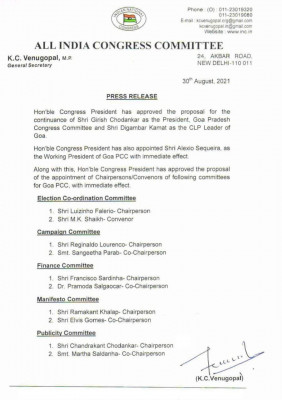 A questionable leadership while despite desertions AICC High Command still stamped approval on Girish Chodankar continuing, the Working President Alexio Sequeira was missing in polity over the years

So AICC Goa in-charge Dinesh Gundu Rao broke many a congressmen’s hearts and stated the obvious as former Goa Congress President and CM Luizinho Faleiro flew to TMC’s arms in Kolkata by stating that his party is now open for a pre-poll alliance. With this the curtains come on will they but doors open for many to walk into TMC, AAP and other’s welcome arms. The buzz is that Congress will be fighting on 20 seats with GFP (the same party that denied it power last time) getting 7 seats and NCP 7 seats and gates open for the remaining 6 seats. But central to Luizinho’s failure to form Govt last time and Girish Chodankar the current leader is a saga of weak, procrastinating leadership, opportunistic and loyalty of no productive purpose.

With Luzinho’s departure tales of how Girish and his merry bunch of young and immature leaders have been side-lining seasoned senior leaders, belittling dynamic young leaders and even promising everything from party tickets for Assembly 2022 to plum party positions is coming to the fore. From old South Goa MP Francisco Sardinha calling him weak, indecisive and conniving against party senior to young Curtorim MLA Reginaldo Lourenco accusing him of embezzling party funds to scores of aspirants to various seats stating that the incumbent GPCC President have assured them ‘ticket’, Faleiro’s departure is not a flash in the pan but curtain-raiser of a slide that threatens to continue further.

Nice guy, loyalist Girish isn’t exactly the General who could lead INC Goa into Assembly 2022 and is not even a shade of Faleiro 2017.