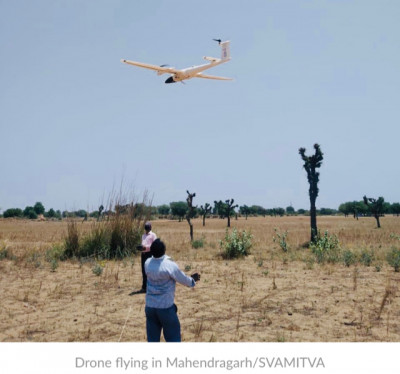 In April 2020, barely a month after Prime Minister Modi announced a nationwide lockdown, he launched a programme that uses drones to survey village residential land to allow title deeds to be issued and end property disputes. A year later, we found the drone surveys creating new property disputes and some owners losing titles to land.

New Delhi: One winter morning in 2020, Amichand (who gave us only his first name) watched, a little nonplussed, as a drone flew over Akbarpur Nangal village of Kanina block in Mahendragarh, Haryana.

The 56-year-old farmer would find out only weeks later that his home was now marked in village property records as being owned by his son, who claimed the house as his during door-to-door visits by officials.

“I am told that my son claimed my house,” Amichand told Article 14. “I want it to be registered in my name instead.”

When Prime Minister Narendra Modi said in his Independence Day speech in August 2021 that drones were helping rural citizens map their lands and apply for various schemes and loans, he was referring to the Svamitva Yojana, a union government scheme to provide land titles to homeowners in India’s villages.

Modi claimed that Svamitva would end property disputes in rural India. But more than a year since its launch, a closer look at the implementation of the scheme shows a different ground reality. For hundreds of people like Amichand, the scheme has started new struggles to prove ownership of a home they have lived in for years.