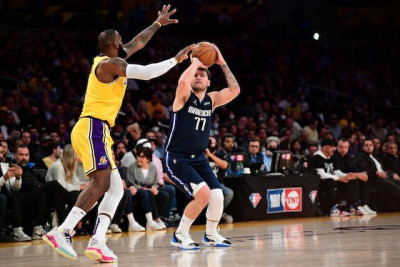 While Los Angeles Lakers superstar LeBron James finds himself at home during the playoffs, the new age of NBA stars have cemented themselves this postseason. Arguably none have done so more than Dallas Mavericks guard Luka Doncic, who has surprisingly led his team to the Western Conference Finals opposite the Golden State Warriors and their all-time great trio of Stephen Curry, Klay Thompson and Draymond Green.

In just his fourth season, Doncic has already established himself as perhaps the NBA’s next great superstar and his size, scoring and passing ability have drawn comparisons to James. Indeed, Doncic’s all-around game does compare well with the Lakers’ star and Green believes so as well.

Green discussed the similarities between Doncic and LeBron, believing the two are very much alike in many ways but do have some differences as well.

Both Luka and LeBron are masters at controlling the game with the ball in their hands, reading and manipulating the defense and getting the best out of their teammates. It is an interesting note that Green makes about Doncic being slightly more of a shoot-first player than James, but it isn’t necessarily wrong either.

Obviously the other big difference that Green didn’t mention, but also doesn’t need mentioning, is LeBron’s athletic advantage. But the great thing about Luka is that he has shown he doesn’t need elite athleticism to dominate in the NBA.

The new era of NBA stars is growing before our eyes and these playoffs have seen the likes of Doncic, Ja Morant, Jayson Tatum and Anthony Edwards have truly impressive outings. There is always a tendency to compare the new stars to current or past ones and it is hard to argue that Doncic and James have some serious similarities.