Does Yashwant Sinha's "Rashtra Dharma" not require him to bow out for Droupadi Murmu? 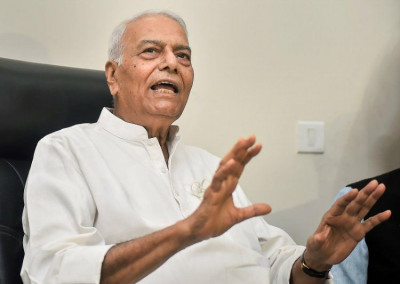 Accompanied by the top guns of the opposition, former BJP leader Yashwant Sinha may have filed his nomination papers as their joint Presidential candidate on June 27 in response to what he calls his inner calling for doing his "rashtra dharma" against Prime Minister Narendra Modi.

But what does he hope to gain by standing against an unassuming Droupadi Murmu, the NDA candidate who is set to be India's first tribal President.

Compared to Sinha's stint in politics in pursuit of position of eminence, Murmu rose from a hugely disadvantaged background to carve out a special place among several lakhs of tribals who look upto her as an icon of empowerment.

Everyone knows that Sinha's battle this time is about his disenchantment with Modi and the BJP and even less to do with the crisis faced by the opposition in finding a suitable candidate for the top post.

It may surprise many that, before he left the BJP's company, Sinha defended Modi many times before and even looked forward to his rise as the prime minister. But once Modi and the BJP refused to entertain his demand to be made chief minister of Jharkhand and preferred either Arjun Munda or Raghubar Das at different times, Sinha's disenchantment knew no bounds. So did his anger and, consequent hopping from one party to another.

Certainly, Sinha is not the first choice of the opposition. We know that his name cropped up after NCP leader Sharad Pawar, National Conference leader Farooq Abdullah and Gandhiji's grandson Gopal Krishna Gandhi turned down requests from other opposition leaders in this regard.

West Bengal Chief Minister Mamata Banerjee even invited rebuke from other opposition leaders for her unilateral move in this regard. Even Pawar was not happy that his name was bandied about despite his clear "no'' to Banerjee, right from the beginning.