‘Diet’ goes for a toss, as Olympians tuck into ghee-laden food cooked, served by Captain 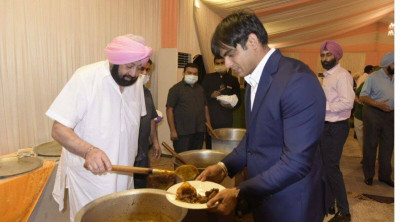 While Chopra had missed the awards function for the Olympics medalists on August 12 due to high fever, Amarinder Singh had told the other players that he will cook dinner for them in their honour.
It has been a month and a day since Neeraj Chopra created history at the Olympics Stadium at Tokyo by becoming the first Indian athlete to win an Olympic gold with a javelin throw of 87.56m. Prior to that historic day, the 23-year-old from Haryana would rarely have diet cheat days. The story, however, was different on Wednesday evening as he bit into “mutton khara pishori”, served to him by Punjab Chief Minister Capt