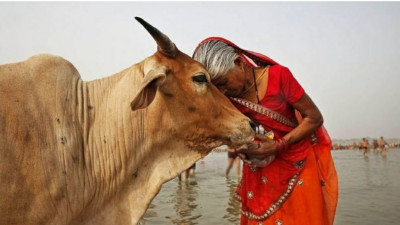 Most of us, who have studied Urdu, at maktabs, madrasas, or homes, are well aware of this poem. The poem is part of a five-book Urdu learning course, written in the late 19th century by Ismail Merathi, still followed in the subcontinent. What it points towards is the immense respect towards cows from a Muslim scholar of the 19th century. His scholarly works including this poem have remained part of the curriculum in Muslim institutions across the subcontinent for more than a century now.

Apart from this poem, we find evidence where Muslim scholars, as well as leaders, like Khwaja Hasan Nizami, Maulana Madani and others had actively campaigned for banning cow slaughter, or for refraining from its slaughter, in India. Time and again Muslim scholars have argued that one should refrain from slaughtering an animal that creates a law and order problem, or hurts the sentiments of neighbours.

Religious seminaries like Darul Uloom, Deoband has appealed to this effect for more than a century now. .....
Read Full story 👇👇👇