Dhyan Chand: The hockey wizard who had the world on his stick. 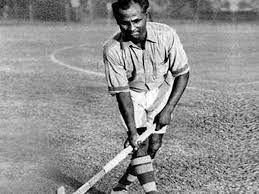 Such a great personality 👍🏻

Born on August 29, 1905, in Allahabad to Sharadha Singh and Sameshwar Singh - a soldier in the British Indian Army, Dhyan Singh was drawn towards hockey at a very early age. Like his father, he too enrolled himself in the army at the age of 16 and continued to play his favourite sport there.

His time in the force saw him play various army hockey competitions and regimental games between 1922 and 1926. The youngster would take to the game like fish to water, and develop into a fine craftsman for his side.

Dhyan would be so engrossed in the game that he played hockey even during the night after his duty hours, practising under the moonlight, a reason that earned him the name Dhyan Chand (‘Chand’ means moon in Hindi).His progress through the ranks saw him make the Indian Army team for a tour to New Zealand in 1926.
His quality and performance didn’t go unnoticed for long as Chand would soon make it to the Indian team for the 1928 Olympics in Amsterdam.
Returning from their triumph in Berlin, Chand joined his regiment and confined himself to army hockey. Though the sport in India continued to scale greater heights with the likes of Balbir Singh Sr leading the charge as India went on an all-conquering era, Dhyan Chand's contribution remains unparalleled.

He retired from his army service in 1956 as Major Dhyan Chand and was conferred the Padma Bhushan - the third-highest civilian award in India - the same year. He would take up coaching soon and was later named the chief coach of the National Institute of Sports (NIS), Patiala.

The nation celebrates its National Sports Day on Dhyan Chand’s birthday (August 29), and he is the only hockey player to have a commemorative postage stamp and the First-Day Cover in his honour.

The Dhyan Chand Award for Lifetime Achievement in Sports is a national sporting honour named after the hockey legend.