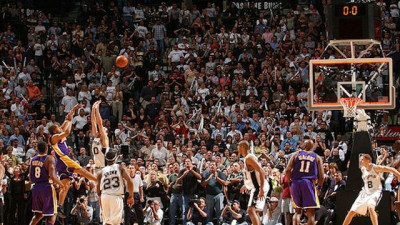 The 2003-04 NBA season is not remembered fondly by Los Angeles Lakers fans. The Lakers opened that year having acquired two future Hall-of-Famers in Gary Payton and Karl Malone to pair with incumbent stars Kobe Bryant and Shaquille O’Neal.

That made them the favorites to win their fourth NBA title in five seasons. The team also featured a deep bench including Derek Fisher, Kareem Rush, and a rookie forward named Luke Walton.

The pieces never quite came together, however, and lost the NBA Finals in five games to a scrappy Detroit Pistons team. Before reaching the Finals, the Lakers had to make it through the Western Conference playoffs.

They ran into trouble in the second round against the defending champion San Antonio Spurs, who won the first two games of the series. The Lakers took the next two at Staples Center, setting up a pivotal Game 5 in San Antonio on May 13, 2004.

The Lakers led for most of the game, carried by Bryant’s 22 points, four rebounds and five assists.

O’Neal chipped in 11 points and 11 rebounds while trying his best to contain Tim Duncan, who outplayed his fellow legendary big man to the tune of 21 points and 21 rebounds. It was Duncan who, along with Tony Parker, sparked the Spurs’ comeback in the fourth.

The two combined for 17 of San Antonio’s 20 points in the quarter. Duncan scored six unanswered at one point to give his team a 69-68 lead and Parker added a fastbreak layup to push the advantage to three.

But O’Neal and Bryant each chipped in a bucket to put the Lakers back on top, 72-71. With 5.4 seconds left, Duncan made a near-impossible fadeaway while closely guarded by O’Neal. With just four-tenths of a second left, Lakers head Phil Jackson called a timeout.

As Bryant drew two defenders beyond the three-point line, Fisher caught the inbounds pass from Payton and, in one motion, heaved a shot just before the buzzer. The prayer went in, stunning the home crowd and sending the Lakers sprinting to the locker room with a 74-73 win.

“One lucky shot deserves another,” O’Neal famously told reporters after the game.